'Hitler's Art Thief: Hildebrand Gurlitt, the Nazis, and the Looting of Europe's Treasures'

Hitler's Art Thief: Hildebrand Gurlitt, the Nazis, and the Looting of Europe's Treasures 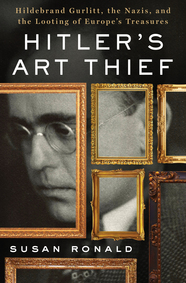 The world was stunned when eighty-year old Cornelius Gurlitt became an international media superstar in November 2013 on the discovery of over 1,400 artworks in his 1,076 square-foot Munich apartment, valued at around $1.35 billion. Gurlitt became known as a man who never was - he didn't have a bank account, never paid tax, never received social security. He simply did not exist. He had been hard-wired into a life of shadows and secrecy by his own father long before he had inherited his art collection built on the spoliation of museums and Jews during Hitler's Third Reich. The ensuing media frenzy unleashed international calls for restitution, unsettled international relations, and rocked the art world.

“Hitler's Art Thief is absolutely gripping from start to finish. Susan Ronald holds nothing back as she lays bare in merciless detail the cunning, greed and hypocrisy that allowed Hitler's willing accomplices, like the notorious Hildebrand Gurlitt, to feed off human misery to their heart's content. Everyone should read this book.” —Amanda Foreman, bestselling author of A World on Fire and columnist for The Wall Street Journal and Smithsonian Magazine

“Susan Ronald tells the story of Hildebrand Gurlitt, one of the most important and elusive art dealers of the twentieth century, and how he manipulated both the Nazi authorities and the Allied restitution officials in ways that made him a very wealthy man (with over 1,400 pictures in his possession at the time of his death). Exhibiting keen psychological insight and utilizing her experience as a banker to undertake deft forensic accounting, Ronald shows how Gurlitt embezzled during the Third Reich and then concealed his treasures in the postwar period.  Experts are still piecing together this complex history (and restituting the stolen works). Ronald’s sweeping, and indeed, galloping narrative, breaks new ground in helping to understand this fascinating figure and the historical context in which he operated.” —Jonathan Petropoulos, author of Royals and the Reich and John V. Croul Professor of European History at Claremont McKenna College

“A thrilling voyage into the largest theft in history that started during early Nazi terror and went dormant after the war. In 2011, an Alfred Flechtheim looted painting “The Lion Tamer” mysteriously appeared for sale in Germany. Susan Ronald unravels the secretive Gurlitt role in Hitler’s Art Thief, a must-read masterpiece, exposing the unsavory reality of the insatiable Nazi greed for art and the continuing resistance to return artifacts to the victims.” —Mel Urbach Esquire, International Holocaust Restitution Lawyer and Lecturer

“Susan Ronald has written what will prove to be one of, if not the, definitive accounts of the whole Gurlitt saga. Giving its readers a thorough overview of the 19th- and 20th-century Gurlitt dynasty's engagement in art – as scholars, dealers and collectors – yet never losing its lightness of touch, deftly managing to span place and time with abundant insight, the book is a pleasure to read.” —Richard Aronowitz, Director & Head of Sotheby’s Europe Restitution Department for Europe

The Author:
Born and raised in the United States, Susan Ronald has lived in England for more than twenty-five years. She has consulted for five British government departments and The National Trust as an historian and commercial advisor on Britain's historic built environment. As the keynote speaker at the Richard III Society's Annual General meeting in 2011, she put into context the Tudor world view of Richard III as expressed in Shakespeare. She is the author of six history books ranging across the ages, with this latest book being her first foray into the twentieth century. She is also the author of Heretic Queen: Queen Elizabeth I and the Wars of Religion, Shakespeare's Daughter (a novel), The Pirate Queen, The Sancy Blood Diamond, and France: Crossroads of Europe. She also owns a film production company, and is a screenwriter and film producer.

The book is published by St Martin's Press