Witnessing the Robbing of the Jews A Photographic Album, Paris, 1940-1944 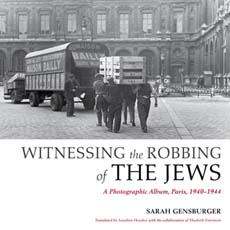 Publisher's description:
The center of the art world before the war, Paris fired the Nazis’ greed. The discovery of more than 1,500 prized paintings and drawings in a private Munich residence, as well as a recent movie about Allied attempts to recover European works of art, have brought Nazi plundering back into the headlines, but the thievery was far from being limited to works of art. From 1942 onwards, ordinary Parisian Jews—mostly poor families and recent immigrants from Eastern Europe—were robbed, not of sculptures or paintings, but of toys, saucepans, furniture, and sheets. Witnessing the Robbing of the Jews tells how this vast enterprise of plunder was implemented in the streets of Paris by analyzing images from an album of photographs found in the Federal Archives of Koblenz. Brought from Paris in 1945, the photographs were cataloged by the staff of the Munich Central Collecting Point. Beyond bearing witness to the petty acts of larceny, these images provide crucial information on how the Germans saw their work. They enable us to grasp the “Nazi gaze” and to confront the issue of the relation between greed and mass destruction.

Sarah Gensburger is researcher in social sciences at the French National Center for Scientific Research (CNRS). She is author of C’étaient des enfants: Déportation et sauvetage des enfants juifs à Paris (2012) and (with Jean-Marc Dreyfus) of Nazi Labor Camps in Paris (2011) and editor (with Claire Andrieu and Jacques Semelin) of Resisting Genocides (2011).

Jonathan Hensher is a lecturer in French Studies at the University of Manchester.

Elisabeth Fourmont is a freelance translator in Paris.

Reviews:
"Sarah Gensburger's comments on each photograph are fascinating in light of the reproductions [...] The great value of this publication lies in providing original material on the history of the plundering, while cultivating prudence and distance in its gaze. Thus, it gives us access both to the traces of the past and to the work of the historian, who explores, supposes, deduces and sometimes lets a healthy doubt linger." —Claire Zalc, Vingtième Siècle. Revue d'histoire

"The material for Sarah Gensburger's study is for the most part previously unseen: a collection of eighty-five photos taken in France during the Occupation [...] These are particularly powerful images. They are all the more so because of the meaning that is given to them through the analysis and historical commentary of the author" —Anne Grynberg, Etudes Photographiques

"These photographs reveal a whole new dimension of the Nazi spoliation of Jewish property in occupied France. Art theft is well known. Who knew that the Nazis also sent to Germany 674 trainloads of household goods from the apartments of deported Jews? The heaps of used toys, pans, chairs, and clocks are a pitiful final trace of destroyed families. They also show how the Nazis tried to anonymize their victims for annihilation, and to profit from their distress. Sarah Gensburger has edited them with precision and with a keen sense of multiple ways to read images." —Robert O. Paxton, author of Vichy France and The Anatomy of Fascism

"With piercing insight, Sarah Gensburger guides readers through this extraordinary collection of German photographs documenting the Nazi looting of Jewish homes in wartime Paris. At the operation’s height up to eighty French moving vans a day hauled plunder to secret German depots in the heart of the city where Jewish prisoners were forced to pack the shipping crates bound for Germany. Gensburger’s account captures what these pictures reveal, ironically, about a project designed to eradicate all traces of its victims and their world. A singular contribution to Holocaust history and a brilliant model of photographic analysis." —Herrick Chapman, editor, French Politics, Culture, and Society

"A wonderful and telling record. Only now are historians seriously engaging with the material plunder that accompanied the Holocaust. The remarkable text that accompanies the photographs, dry-eyed, precise, yet moving, consolidates Sarah Gensburger’s reputation as one of the most insightful and innovative historians of the Holocaust in France today." —Mark Roseman, author Documenting Life and Destruction: Jewish Responses to Persecution, 1933-1946


Witnessing the Robbing of the Jews is an enhanced translation of the French book Images d’un pillage (Textuel, 2010).
return to list of books and publications
© website copyright Central Registry 2022