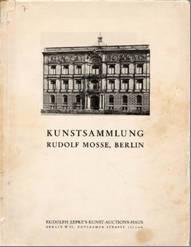 21 August 2014: Rudolf Mosse was a philanthropist, advertising pioneer and the founder of the well-known Verlag Rudolf Mosse, a publishing house in Berlin, which, among other periodicals, published the Berliner Tageblatt. Following Rudolf’s death in 1920, Hans Lachmann-Mosse became the successor to the family’s business interests. Both Rudolf and his son-in-law Hans assembled significant art collections.

Following the Nazi rise to power in 1933, Hans Lachmann-Mosse and his family fled Germany. The same year the family’s assets were seized in Berlin and elsewhere by the Nazi government.

In 1934, parts of the Mosse family art collections were sold under duress at two auctions in Berlin, one at Rudolf Lepke’s Kunst-Auctions-Haus on 29-30 May 1934 and one at Auktions-Haus Union on 6-7 June 1934. Both auctions were organised by Karl Haberstock.

The full contents of the catalogues of both auctions have been made available in both German and English through the Object Database of the Central Registry of Information on Looted Cultural Property 1933 - 1945.