"The West” Versus "The East“ or the United Europe? The different conceptions of provenance research, documentation and identification of looted cultural assets and the possibilities of international co-operation in Europe and in the world, Podebrady, Czech Republic, 8-9 October 2013

The international conference will point to the diverse conceptions and interpretations of provenance research implemented mainly in the European countries as well as in the world and will also highlight the requests made on this research by the various subjects of the restitution process.We believe to bring together all those, whose activities are focused on the Nazi-era looted cultural objects and their return back to the original owners or their heirs.

For the conference program as a pdf, click here. Otherwise see full details below.

conference will be held in the Chateau Theatre, Jiri z Podebrad Square 1/I , Podebrady

How to get there?

provided during the conference by Chateau Restaurant

conference is held under the auspices of

Mgr. Alena Hanakova, Minister of Culture of the Czech Republic and

The 5th International conference is organized with the financial support of the Ministry of Culture of the Czech Republic.

admission free at the reception

Registration fee does not include the costs related to the transport and accommodation.

* By bank transfer only*

Payment details required by your bank by using this method of payment:

By order of: /please enter the name of your institution/

Recipient of payment (name of the Czech institution):

Address of the Czech Bank:

Note: /in order to identify your payment, please enter your name!!/

Please note, the bank charges  linked up with the bank transfer are paid by the payer.

After receiving the conference fee the Documentation Centre will confirm your payment by e-mail.

For an immediate identification of your payment , please do not forget to enter your name into the Note .

No payment received after September 30, 2013 can be accepted.

In case of cancellation of your payment, please kindly send an e-mail to:

In order to go to Podebrady, you have to reach either the railway stations (In Czech Masarykovo nadrazi or Hlavni nadrazi) or bus station (Cerny Most)

1/Transport from the airport to the city centre of Prague

a/ Arriving by plane

or to “Muzeum” station (transfer station between lines A and C in order to change for Hlavni nadrazi  – a railway station for Podebrady).

b/ Arriving by train

All railway stations are connected with metro stations in Prague.

You may leave Prague for Podebrady from:

2/Transport from Prague to Podebrady

There is a regular train service between Prague and Podebrady ensured by public transport company – Czech Railways. The trains leave Prague for Podebrady from Masarykovo nadrazi or Hlavni nadrazi.

To check the time and place of your departure, please have a look at:

The best way how to reach Podebrady by train is to choose the direct line between Prague and Podebrady. The journey takes between 40 – 60 minutes. Leaving Prague by train is also more comfortable as both of the departure places (Masarykovo and Hlavni nadrazi) are in the city centre and are easily reached by metro.

There is also a possibility to take a bus from Prague to Podebrady. In this case the place of departure is Bus Station – Cerny Most (terminus of metro line B).

Departure time of bus for Podebrady at:

As this town became famous for its spa resort, you may find many hotels and guest houses in the centre of the town. With regard to that, we highly recommend to book your hotel in advance.

The other hotels and guest houses can be also found at: 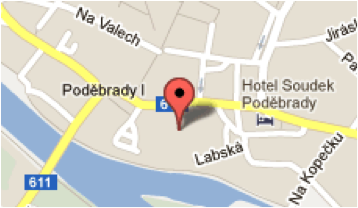 The town Podebrady was established near an important crossing on the river Labe (“Elbe”) in 1224. The old wooden castle built in 12th century changed over the centuries into a comfortable chateau and it is a dominating feature of this town.  It is also a place where the most famous Czech King – Jiri of Podebrady was born in 1420. During his reign the peace efforts far surpassed the following centuries. The present appearance of the chateau is a result of several thorough reconstructions from a water castle, a medieval fortress and a Renaissance royal seat up to a Late Baroque building intended to fulfil military purposes during the reign of Josef II.

A small spa was established here in 17th century and its spring was considered as the best ferriferous water. The most significant period started in 1905 when a spring of mineral water was discovered here while searching for drinking water in the courtyard of the castle. The first spa season began as the mineral water, with an excellent medical force in the carbonic spa, brought the predicted “golden age” of the town in 1908.

The town Podebrady has become a favourite summer resort thanks to the successful health-results, eventful cultural, social and sports life and the beautiful natural setting.