The publisher's description is set out below, followed by a review from the Wall Street Journal:

This brilliantly researched, atmospheric history of Portugal's capital city during World War II is a gripping tale of high-stakes intrigue, betrayal, double-dealing and survival. Lisbon had a pivotal role in the history of World War II, though not a gun was fired there. The only European city in which both the Allies and the Axis powers operated openly, it was a temporary home to much of Europe's exiled royalty, over one million refugees seeking passage to the US and a host of spies, secret police, captains of industry, bankers, prominent Jews, writers and artists, escaped POWs, and black marketeers. An operations officer writing in 1944 described the daily scene at Lisbon's airport as being like the movie Casablanca, times twenty.

In this riveting narrative, renowned historian Neill Lochery draws on his relationships with high-level Portuguese contacts, access to records recently uncovered from Portuguese secret police and banking archives, and other unpublished documents to offer a revelatory portrait of the War’s back stage. And he tells the story of how the Portugal, a relatively poor European country trying frantically to remain neutral amidst extraordinary pressures, survived the war not only physically intact but significantly wealthier. The country's emergence as a prosperous European Union nation would be financed in part, it turns out, by a cache of Nazi gold.

The Capital of Intrigue in a World at War 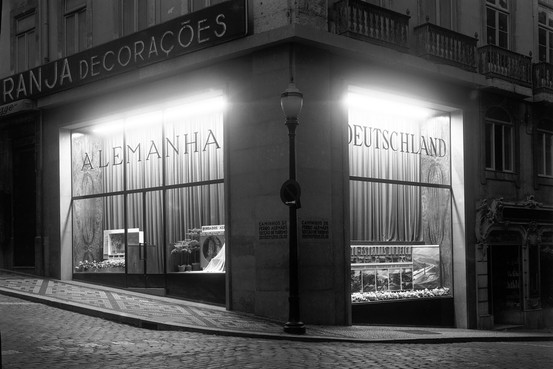 'Decaying, shabby, and in desperate need of reinvention, Lisbon in September 1939 was a neglected sleeping beauty of a city," Neill Lochery writes in "Lisbon," his evocative chronicle of this little-known corner of World War II. Portugal had only recently been saved from financial calamity, and the glories of empire were in decline, but trams still rattled through Lisbon's cobbled streets. And though the lights started to go out all over Europe, "Lisbon remained brightly lit" and, for the next five years, was the hub of the universe for refugees fleeing the war.

Mr. Lochery skillfully documents the experiences of the rich and glamorous as well as the less fortunate and even sinister of the city's wartime arrivals. We find out how the Duke and Duchess of Windsor passed their time in Lisbon—dining and golfing with the banker Ricardo Espirito Santo—and became the focus of Operation Willi: a bizarre Nazi plot to kidnap the abdicated king and use him for propaganda.

Mr. Lochery also clarifies some of the controversy about why the plane carrying the Hollywood actor Leslie Howard, fresh from his leading role in "Gone With the Wind," was shot down by the Luftwaffe as it returned to England from Portugal on June 1, 1943. Did the Germans seriously think that Howard's portly agent was actually Winston Churchill on his way back from Casablanca? Or was it pilot inexperience? Mr. Lochery also explores another layer of intrigue involving the intelligence services protecting their code-breaking successes.

We learn, too, that more than a million refugees passed through the city's increasingly pricey hotels, including Peggy Guggenheim, Max Ernst, Marc Chagall, Arthur Koestler and Calouste Gulbenkian—the Armenian oil magnate known as "Mr. Five Per Cent" for his share of the deals he brokered. Ensconced in Lisbon's Hotel Aviz, he devoted himself to buying up refugee Henry Rothschild's art collection.

The city was also rife with spies: Ian Fleming, Graham Greene, Kim Philby and Malcolm Muggeridge among them. Within months of the war starting, the British and the Germans had ramped up their intelligence activities under the watchful eye of the Portuguese secret police. The locals got in on the act as informers: Hotel staff reported gossip, and prostitutes used pillow talk to extract shipping movements from drunken sailors. Rumor was rampant. The streets ran with paranoia.

Lisbon, where the "river mist and fog rolled in at night, giving a distinctly noir movie atmosphere," was the perfect setting for all this, while down the coast in the Estoril casino there were nightly displays of refugee desperation and opportunist grandstanding. In "Casablanca" we're told that Ilsa was due to fly to Lisbon, but in reality, Mr. Lochery notes, the scene at the city's airport with smugglers, spies and refugees was really "Casablanca" magnified "twentyfold."

Given his star-studded cast, even Mr. Lochery must have been surprised to find that the Oscar-winning performance, the one that reduces all the other big names to walk-on parts, is that of the Portuguese dictator, António de Oliveira Salazar. Despite holding onto power for nearly 40 years (1932-68), Salazar is the least known of all the European autocrats. In Portugal he is vividly remembered for his suppression of democracy, his oppressive secret police and his persecution of Communists, but he did have a very good war.

The son of a small rural freeholder, a failed seminarian and ex-economics professor, Salazar ran the country from a sparsely furnished, unheated office. He was a monk manqué who put Portugal and its empire before all else. British reports paraphrased by Mr. Lochery note that he had "the shrewdness and parsimonious habits of the peasant" and "the cold detached outlook of the scholastic churchman" but was also the most "physically beautiful of all the European dictators." Initially at least, he was an admirer of Mussolini, whose photograph he kept on his desk until later, disillusioned, he replaced it with one of the pope.

In keeping with other fascist dictators, Salazar was generally thought to be anti-Semitic, especially after his harsh treatment of his consul in Bordeaux, who, in June 1940, went against Lisbon's express instructions and signed thousands of visas for Jews desperate to leave France. It was a very awkward moment for Salazar: Apart from being intolerant of insubordination, he was striving to keep the Nazis and Franco sweet. It's true that few Jews were harassed once they got to Portugal, but it was equally true that Salazar was aware of the Nazis' treatment of Jews throughout the war and decided to regard it as "an internal issue" of the Third Reich.

He had three main goals during the conflict: to keep Portugal out of the fighting; to avoid being invaded by Germany or Spain (the prospect of governing in exile from the Azores islands, a Portuguese outpost in the mid-Atlantic, was one of his nightmares); and to make as much money from the war for his country as possible.

The British, reminding Salazar of their long-standing treaty (signed in 1373), were constantly infuriated by his doing business with the Nazis, especially over tungsten, which the Germans needed to make hardened steel for tank armor and penetrating missiles. As far as Salazar was concerned, he was buying his country's neutrality by exporting tungsten to the Germans. With the Allies preemptively purchasing the metal and the Axis grabbing every chunk available, the price soared. The country went mad for mining tungsten, and while the Allies tried to cajole Salazar into cutting supplies to Germany, the Nazis responded by, at one point, hijacking a Portuguese liner and evacuating the passengers into lifeboats in mid-ocean.

It was a very tricky game, but Salazar was clever enough to play the opposing sides off against each other. He was especially difficult over the protracted negotiations giving the Allies access to the Azores, which they needed as a staging post for the U.S. to fly in heavy military aircraft for the European and African theaters of war. His intransigence forced the British and Americans to resort to good cop/bad cop tactics, with the former pleading the ancient alliance while the latter threatened invasion.

Moreover, Salazar did make a lot of money for his country. Portuguese gold reserves went up sixfold, mostly because he forced the Germans to pay with the precious metal. By 1945 this hoard had become a problem as the Allies tried to recover reserves looted from invaded countries and, more gruesomely, gold taken from Jews in the form of jewelry and teeth. Once again Salazar outwitted his opponents and after eight years of negotiations returned only four tons out of an estimated 400.

It was a master class in political deftness and stalling tactics, and Mr. Lochery traces the subtlety of the Portuguese leader's maneuvering with clarity and precision. Distilling an enormous quantity of research, he has rendered a fascinating and readable account of this small country's role in World War II, protected, as it was, by its wily champion.

—Mr. Wilson is the author of two novels set in wartime Lisbon, "A Small Death in Lisbon" and "The Company of Strangers."