'Cultural Heritage Conventions and Other Instruments: A Compendium with Commentaries'

Cultural Heritage Conventions and Other Instruments: A Compendium with Commentaries 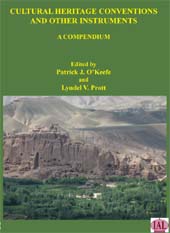 This book, with commentaries from two of the leading experts in the law of cultural heritage, provides all the significant texts of international law on the protection of heritage and includes a short commentary on the evolution of each one and on their relationship to one another.

The instruments discussed include the most significant UNESCO Conventions, including that of 1970 on Illicit Trade, 2001 on Underwater Cultural Heritage, 2003 on Intangible Cultural Heritage, the Unidroit 1995 Convention, the Hague Convention 1954 and its two Protocols, the Convention for the Protection of the Architectural Heritage of Europe 1985, European Convention on the Protection of the Archaeological Heritage (Revised) 1992, the European Landscape Convention 2000, the Council of Europe Framework Convention on the Value of Cultural Heritage for Society 2005, together with a wide range of recommendations and declarations from UNESCO, the Council of Europe and the United Nations.
Colour illustrations throughout the book demonstrate the immense diversity of heritage that is legally protected today.
This book is a fundamental working tool for all cultural professionals and academics, including anthropologists, archaeologists, architects, cultural administrators, legal advisers, museum staff and site curators.
Available from the Institute of Art and Law http://www.ial.uk.com/subscriberoffer.php
return to list of books and publications
© website copyright Central Registry 2022