Published by Vendome Press, Lost Lives, Lost Art tells the stories of 15 Jewish collectors from Germany and Austria, the collections they lost under the Nazis, and the efforts of their families to recover them. 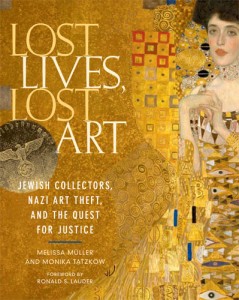 The Wall Street Journal published a review of the book on 30 October:

"Patrons of the Arts, Victims of the Nazis
By TYLER GREEN

Sixty-five years after the Nazis were defeated by the Allies, court cases concerning the restitution of artwork illegally seized by the Third Reich still occupy the highest levels of state. Just this month, the Supreme Court asked the solicitor general to submit a brief in a case that could ultimately determine whether the Norton Simon Museum in Pasadena, Calif., will keep a 480-year-old Lucas Cranach the Elder diptych of Adam and Eve, or if it can be claimed by the sole living descendant of the Amsterdam dealer Jacques Goudstikker (1897–1940).

It may seem like the restitution of stolen art is a straightforward process: Identify a purloined object; bring the rightful owner to the attention of the relevant museum, collector or government; and enact a reunion. Yet in the case of art expropriated by the Nazis, complications have inevitably ensued. Often, such works have been sold (many in manners designed to launder their provenance) and held for decades by an innocent third party. Governments have made it difficult and expen sive for the Nazis' victims to recover stolen property.

Just as restitution remains a hot- button legal and diplomatic issue, so too it is a point of fascination for scholars. Historians treat stolen objects and the Nazis who swept them up as protagonists in a true-crime tale. Every decade or so, a new book celebrates the Allied soldiers (many peace-time curators and archivists) who tracked down these objects. Only rarely are the aggrieved collectors themselves studied.

This is what Melissa Müller and Monika Tatzkow are trying to remedy with "Lost Lives, Lost Art," a hybrid of popular history and coffee-table book that introduces 15 Jewish collectors whose artworks were stolen by the Nazis. Among them is Viennese femme fatale Alma Mahler-Werfel, whose relationships with artists, architects and industrialists left her with significant artworks, including Edvard Munch's "Summer Night on the Beach" (1902), a magnificent Expressionist-Impressionist view of the moon reflecting on a calm body of water. Another was Karl Grünwald, who was an art and antiques dealer and a key patron of both Egon Schiele and Gustav Klimt. Both Mahler-Werfel and Grünwald escaped the Holocaust, but collectors like Leo Bendel and Max Silberberg were not so lucky.

Each chapter focuses on a single collector and the adulatory profiles, matched with an attractive layout and an abundance of well-selected images, often seem a bit like pages torn from Vanity Fair. (Ms. Müller on Mahler-Werfel: "Even today, Alma Mahler-Werfel polarizes people more than almost any other woman in history.") Though the authors deftly summarize restitution efforts regarding each particular collector or family's artworks, they uncover little new information, and the vignettes about the art that their subjects owned are cursory and narrowly informed. Most entries seem designed to rouse a sympathetic emotional response—reducing their subjects to a sentimental, what-wonderful-people-they-were sameness— rather than to present a broad view of Jewish participation in Europe's 20th-century avant garde.

Yet there is much to be said for their goal: to humanize the Jewish collectors from whom the Nazis stole (and from whose heirs later European governments often denied justice). One story the authors retell is that of the six Gustav Klimt paintings (plus other art, jewels and property) illegally seized by the Nazis from central European industrialist Ferdinand Bloch-Bauer. The Austrian government held the paintings until 2006, when Bloch-Bauer heirs successfully negotiated the restitution of five.

A sensible reaction to this happy news might have been to celebrate that the heirs were finally, belatedly free to do with their property whatever they liked. Instead, New York Times art critic Michael Kimmelman accused them of "cashing in" by choosing to sell off the Klimts instead of donating them to museums. If such a prominent observer can still deride great Jewish patrons of the arts as greedy collectors, any attempt to provide a fuller understanding of who they really were is welcome.