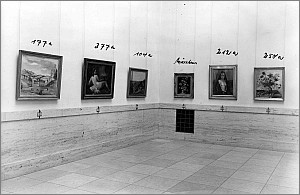 Documentation of room 11 of the GDK 1942, with replacements

This research and digitising project focuses on the 'Great German Art Exhibition ("Große Deutsche Kunstausstellung“ -GDK), which was annually shown in Munich at the House of German Art (Haus der Deutschen Kunst) between 1937 and 1944. The first GDK was accompanied by the exhibition "Degenerate Art“ ("Entartete Kunst“), which was initiated by Joseph Goebbels and on view at the gallery building of the Munich Hofgarten close by.

For the national socialist regime no other exhibition project between 1933 and 1945 had a comparably programmatic and propagandistic significance as the GDK. Explicitly intended to demonstrate the achievements of the regime's cultural politics, the sales exhibitions mirrored both the way the Third Reich conceived of art and of itself as a nation of culture and civilization.  Numerous exhibits were purchased by the national socialist elite, but also by private customers.

For GDK-ONLINE various scattered holdings are collected, related to each other, and made available online in an image and research data base: crucial sources such as photographs of the exhibitions, catalogues, as well as archival information and biographical data. This notably includes a set of six albums with photographs from the ZI's image collection (Photothek) which document the GDK between 1938 and 1943. Aiming at a virtual reconstruction of the GDK, the data base will provide an efficient instrument for research on the art of the national socialist regime. 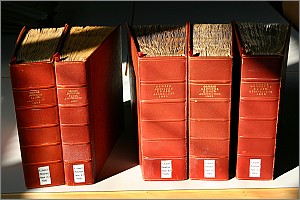 Five of the six photo albums

In preparation for GDK-ONLINE, all exhibition catalogues of the GDK in the ZI and in the Monacensia – Münchner Stadtbibliothek were digitised. In cooperation with the Kunstbibliothek der Staatlichen Museen zu Berlin Stiftung Preußischer Kulturbesitz they are available online at arthistoricum.net and the CONTENTdm-Server of the Kunstbibliothek Berlin, respectively.

GDK-ONLINE will go online in summer 2011.